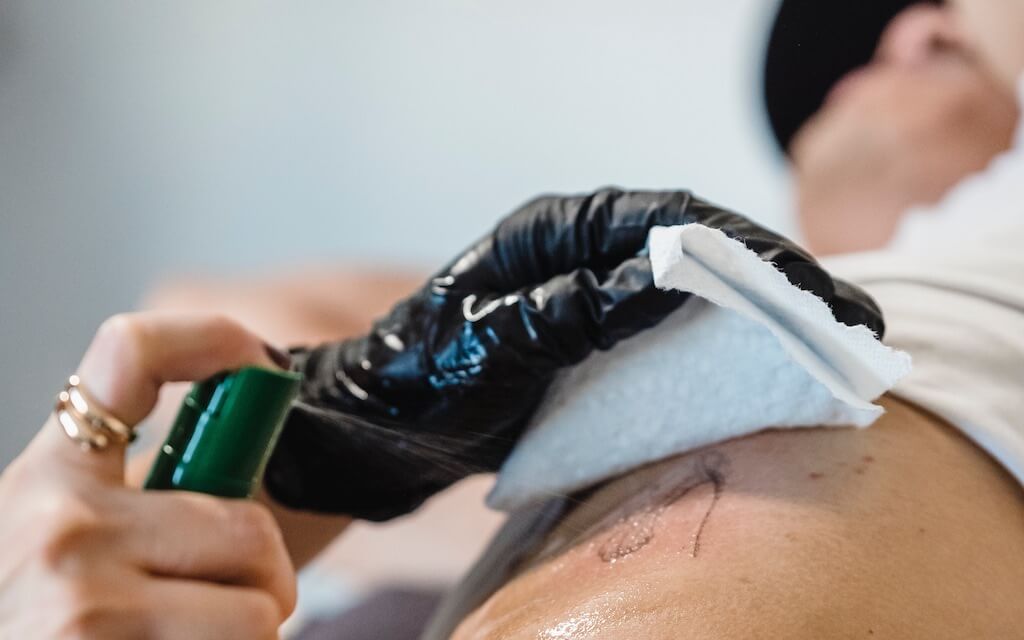 Tattoos are one of the most common ways to decorate your body – and today tattoos are for everyone, whereas in the past this beautiful craft was reserved for certain cultures and subcultures. This is why there is a growing interest among large sections of the population to know where it hurts most and/or least to get a tattoo when they want a memory for life.

If you’re dreading the pain, read our guide to making tattooing as pain-free as possible.

Some places where it typically hurts to get tattooed:

Some places where it hurts least to get tattooed:

On this page, we give you our guide to where you can expect to grit your teeth a little more when the needle hits the skin – and where you might get tattooed where it hurts the least. Read the full article to find out why some places are worse than others when it comes to pain.

At Painfree, we of course also offer you an effective remedy against the dreaded pain, which you can use if you want a certain tattoo on one of the places that are known to hurt more than others.

Once the tattoo itself is over, it no longer hurts. The tattooed area may be sore for days afterwards. Remember to follow our four tips when finishing your tattoo.

Does it even hurt to get a tattoo?

As is also somewhat clear from what we write above, the answer is more complex than giving a simple yes/no answer to the question. Looking at it objectively, the tattooing process involves rapid and continuous penetration of your skin with a super-tipped needle containing pigment – and it would be hard to argue that it doesn’t always hurt a little.

That said, how people experience pain is also very different. For example, men tend to react differently to pain than women, and there have also been many scientific studies in this area. However, we will draw on our broad experience in the tattoo industry.

Where on the body does it hurt most to get a tattoo?

Here we highlight a few of the areas on your body where it’s likely to hurt more than elsewhere. The experience of pain, as mentioned earlier, can vary from person to person – we’ll tell you more about that later on. But the places we mention in the following descriptions are places where significant pain can be expected and where you can really benefit from our effective anaesthetic cream.

Tattoo in the armpits

The armpits rank pretty high on the list of where it hurts the most to get a tattoo. Maybe even the place where it hurts the most. That’s why you’ll probably find that a tattoo artist will directly advise you against getting a tattoo in your armpit if you haven’t been tattooed many times before. For the same reasons, it is also painful to get tattooed in or around the knee bones.

Tattoos around the ribs

The area around your ribs is a place where the skin is relatively thin and where the layer of fat between the skin and your bones is not particularly thick. In addition, the ribs will move every time you breathe, causing the skin to move slightly over the bones. This can make tattoos in this area more difficult – and ultimately intensify the pain of getting tattooed here.

Other places where the fat layer is not so big are, for example, on your ankles, hips and shins. That’s why tattooing is one of the most painful places.

We have grouped all the areas under this heading because they are areas where nerves are somewhat closer than elsewhere. Therefore, you should also expect that there is some pain associated with getting tattooed in these areas, although some of these areas are very popular.

So where does it hurt least to get a tattoo?

Most people don’t choose where it hurts least to get a tattoo. When it’s a decoration for life, it’s often more important that it’s in the right place – and then you can optionally use our anaesthetic cream to take away much of the accompanying pain. But following on from the above list of the most painful places, here’s a list of the areas where pain is most often not as noticeable – and the reason for this is the same as the reason why other places hurt; fat layer, skin thickness and nerve density.

Tattoo on thigh, on upper arm and on calf

The areas mentioned are areas where the muscle mass forms a layer that makes it less painful to get tattooed here than in most other places. In addition, the presence of nerve endings is not as prominent here, and the skin is also relatively thick. That’s why these are considered some of the least painful places to get a tattoo.

Tattoos on the back

The back is also considered one of the places where it doesn’t hurt so much to get a tattoo. The back is a big, beautiful canvas – and the further away from the prominent bones and nerves of the hips and spine you get tattooed, the less painful.

Buy our numbing cream if you want to reduce the pain

Tattoos hurt to get. But some places hurt more than others – and there are other factors at play too. These include gender, fat percentage, skin type and, not least, position on the body.

Want the least painful experience you can have? So go and see the overview of our products to take the pain away next time you need a tattoo. We have both creams and sprays that can help you have a really good experience at the tattoo artist and after.

Back to Top
Close Zoom
Context Menu is disabled by theme settings.

Creams are not in stock. Will be in stock start feb. Dismiss